SO! I has been tagged again….and I now shall endeavor to complete this tag of sunshine!

Let’s begin with the rules….

THANK YOU, Maya, for tagging me! I shall endeavor to answer your questions with as much honesty and…well, you get the point.

1. If your name wasn’t what it is, what would you want it to be?

Um. Anyway. I loooove my real name (which shall remain anonymous because internet and stalking…which I blame upon certain people I’ve met). And if it wouldn’t have been what it is I would be content with that name *halo appears over head* Besides, I wouldn’t do my dad the dishonor of changing my name (one of them, at least) as it he DID spend a lot of time finding one that didn’t mean anything….bad in another language.

But since I suppose I have to answer that question, I think it would be fun to be named Lemon in real life. 😛

2. What do you think of social media?

*tosses head in superiority* Oh, so now we are being asked for opinions, precious? Because I’m so flattered I won’t write a long discourse on it.

My opinion is that…well. There’s really a reason why I don’t have Facebook, Instagram, Snapchat (that’s what it’s called, right?), and various other things. I only have gmail, I believe. And WordPress, WHICH COUNTS!!

Further than that, there’s also a reason I don’t like following people. Or subscribing. Or anything involving that really. If I know the person somewhat (like WordPress), I’ll like their posts. If I know them well, I’ll follow them (seriously. Two out of the four people I follow on WordPress are me…well, as part of a group. Though I’ll have to change that.) And I’ve limited myself to following four blogs, anyway…because I like the number four.

Okay. Stop now. Bottom point is, I can do social media but I won’t if I can avoid it.

3. What is your favorite Marvel movie, and why? (If you haven’t seen any, then explain why you haven’t and if you want to someday.)

Not in that order, though, since Iron Man and Endgame are the more recent ones I’ve seen.

Before you kill me for having watched the conclusion without watching the entire series, I’ll have you know that based on my readings from ScreenRant (I like lists…), rambles from TPSers and ETSers, and Wikipedia, I actually was VERY well-informed and knew 100% what was going on.

Anyway, my favorite movie from that list up there is probably…..either Ant-Man duo or Spider-Man. Or Endgame (though I’m still debating whether that’s because I enjoyed the movie or because I enjoyed knowing so much while my parents, who like Marvel more than I do, didn’t…who am I kidding. I hate time travel.)

4. What is your favorite spice?

Spice? Like paprika or Korean chilli powder? Huh…never thought of that before, actually.

5. Do you appreciate being tagged to do awards/tags?

I used to be annoyed with email tags, honestly, and never did them. Even if it involved a girl with cancer (which, BTW, was a scam.) But blog tags are fun…because it gives me the opportunity to snark back at questions. And just because…they’re fun.

Well…I was told to get a WordPress account by Ellery, which I refused to….until a Creative Writing class of mine forced it. So…I started this blog early to share with some classmates (and made another one for the CW class), beginning with Story Saturdays.

Then break…and then I guess I didn’t loathe sharing AS MUCH as I used to and continued with Tale Thursdays. Because sharing is good, right?

7. What is the best vacation you have ever been on (include at least one picture, if possible)?

Oof. The one that my sister and I BOTH loved is when we went to Pedraforca (a mountain in the Pre-Pyreenes of Spain…) when my dad was doing this mountain bike club thing. I was…four or five, maybe, and we stayed in a log cabin (at least that’s what I think it was) in the mountains that was SO fun.

I mean, it’s one of the most memorable trips I’ve had…you know, one of those trips where you don’t HAVE to go back or WANT to go back because you’re content enough with the memory?

Unfortunately, I don’t have a picture at hand but…here’s a picture of the mountain. 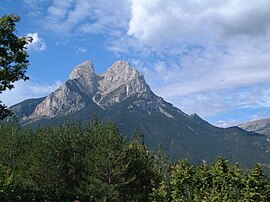 8. [Create the question you want to answer, and answer it here.]

Hmm…create the question, you say? (I have exposed you, Maya!!)

Fine…my question for myself is…nope. Too unbiblical. How about…ah, yes. This should be properly silly but not too silly.

“Who are your four favorite animated characters and books characters?”

For animated characters….oof. Is it bad that they’re all boys and DreamWorks characters? Actually, one is Disney. And they’re Jim Lake Jr. (Trollhunters, a series), Hiccup (I love dragons and his character arc was wonderful, especially in the series), and Jack Frost (because FANTASY! From Rise of the Guardians).

Okay, fine. I think the reason I like them is because Jim is adeptish at sword fighting because he loves cooking for his mom, Hiccup’s blacksmithing skills helped him take down and befriend Toothless, and because Jack’s sense of fun was used to save his sister!

And the Disney one is Mushu (Mulan)…because who DOESN’T love snarky dragon lizards?

For BOOKS characters. *breathes in and out* WHY DID I ASK MYSELF THAT DOUBLE QUESTION?!

Okay…okay. Let me think. I really like Kalmar from the Wingfeather Saga. Yes, I sort of related to Janner more (especially in that Fane of Fire scene) but Kalmar’s character as the mischievous second brother who suddenly found out was king and his REACTION was so…good.

And…and…and…Steffen (from K.M. Shea’s Wild Swans and Puss in Boots). Just because I LOVE his hidden snark and opinionated streak hidden underneath his political smiles and cold demeanor. And because his role as overprotective brother to Elise was GOLDEN. Like…yellow golden.

Next character… I’ll just say Anitgone. From the Theban Plays…You know, one of the few interesting female characters in literature? Being psycho, stubborn, and interesting. Unlike the stereotypical damsel in distress/femenist icon?

Final character in this long answer is…Rakel (from the Snow Queen duology by K.M. Shea). Remember Disney’s Frozen? That retelling of the Snow Queen with the Snow Queen being good? Just imagine Elsa but a THOUSAND times better. Same problems of fear and isolation but handled much better (because come on!!!!! Elsa just reforms after seeing her sister get iced? And by reformed, I mean, she sees her worst fear comes true, sobs out of love and turns it back, and then suddenly becomes all happy and chipper and manages to love the country that isolated her and turn everything back normal. Sounds plausible, I guess but…no.)

9. What is your favorite Andrew Peterson song, and why (the why is important)? (If you haven’t listened to his music, just say “His Heart Beats.” It’s probably your favorite. Or start listening and pick one that catches your attention.)

“His Heart Beats” is a GREAT A.P. song!! And one of the first I heard, too. But it’s not my favorite favorite…I really like his Wingfeather Saga songs (“My Love Has Gone Across the Sea” and “Yurgen’s Tune“). But I think my favorites would either be “Last Words (Tenebrae)” or “Is He Worthy?“

Why I like those songs? Let’s see…”Last Words” is just catchy just unsingable. And I appreciate that…I mean, it captures Jesus’ last words into a song and just repeats them like a chorus of wistfulness and triumph.

“Is He Worthy?” is also beautifully lyric-ed and melancholy but hopeful. I love the verse he focuses on and how Peterson expands on that. Come to think of it, Peterson is pretty good with themes and focusing on them without sounding too cliche or preachy.

Hmm…MBTI is the only one I’ve taken. And I’ve gotten INTP-A, which fits somewhat. Ennegram is confusing and I can’t properly pinpoint a personality that fits me. Neither does INTP, for that matter…but it’s close-ish…maybe.

Or maybe I would donate it to a missions…because that’s the sensible thing to do when you have that money to spend?

THIS was a long thing again. But questions usually are. I nominate….well, I really don’t know WHICH eleven to tag who will do it. So I’ll just discreetly nominate anyone who wants to do it (since Ellery’s already been tagged, I think) and…Shiphrah and Magic.

You’re welcome for gracing you with another long post. Just for that, I promise to make this Tale Thursday short.

View all posts by Lemon Duck

This site uses Akismet to reduce spam. Learn how your comment data is processed.